skip to main | skip to sidebar

A Not-So-Happy Birthday for the Magna Carta 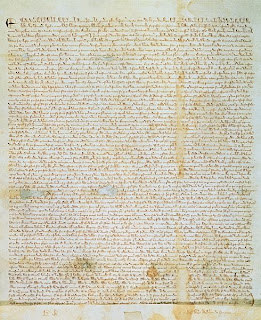 Not happy at all, given that the Brits just extended the amount of time that the law allows uncharged suspects to be kept in custody. I can't find the audio clip, but this morning the BBC included a snippet of a member of the House of Commons pointing out what should be obvious to Gordon Brown - that the bin Ladens of the world no longer need to work so diligently now that secular democracies are now taking it upon ourselves to curtail our own freedoms.

On this side of the Atlantic the Constitution has been at least as trashed in the last several years, motivated by similar fears and rationalized with those same fears. But Brit pols seem to have more balls than American pols; this Tory is so horrified by the decision that he's resigning his position. Then again, if one house rep resigned for each of the major constitutional crimes committed in the last few years (yes, that's a euphemism for the reign of the Bush administration), DC would be a ghost town in no time and who would finally prosecute the scores of offenders?
Posted by kimberly kinchen at 4:53 PM 1 comment:

Now you can read George Monbiot's impressively clear-eyed account of how he came to attempt the Bolton arrest. Monbiot makes an eloquent and convincing case--take that, Michael White--on why Bolton, et al, deserve to have war crimes charges brought against them (note implied right to due process). Don't forget to read the comments. My favorites are from those who stick to the strict legalities: Monbiot's attempt wasn't an actual legal citizen's arrest, they point out. Thus missing the point, which is that so many unconscienable means of effecting all kinds of international policy and events have become so normalized that we now describe torture as "prisoner abuse." Etc. etc.

I know, it seems that I'm just a shill for the Guardian. In my defense, I run down the LA Times, NYT, Wa Po, BBC and the Guardian most days, and time and again it's the Guardian that I read more of more often, with the LA Times coming in a close second (writing for an audience presumed to be as sophisticated as the NYT's, but without the weighty pretense of the NYT's historical "paper of record" burden).

Not that the Guardian is beyond stooping to bits on the hair habits of pols. It's just that rest makes up for it, and more.
Posted by kimberly kinchen at 7:15 PM No comments:

A quick but substantial one I just came across during bedtime reading:

While George Monbiot (pictured here, via the Guardian) failed in his attempt at making a citizen's arrest of John Bolton, there's nothing to do but admire the effort. If the U.S. Congress won't go after war criminals, perhaps it's up to like minded citizens of of the world to do it. Sure, the American constitution suffers when our own don't act, but it might actually do that making-the-world-safer-for-democracy thing. And sure, it might cause a little havoc here, but imagine, all over the world, deserving officials from this administration (and there are of course no lack thereof) being arrested by common men and women of the world.

UPDATE: The Guardian's Micheal White--who wrote aforementioned story--talks about just what a war criminal is and whether or not Bolton fits the bill. Also, you can now find a slideshow of Monbiot's arrest attempt. Bolton received a warm reception, it seems: 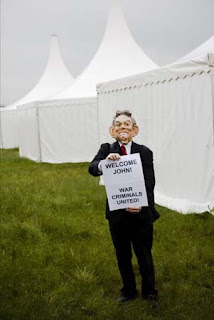 "When he picks his nose, which digit does he use?" or: Why I oppose the 24-hour news cycle 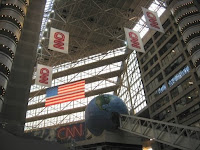 Because such a great portion of my adult life has been spent under the influence of the internet and the 24-hour news cycle it begat, my attention span is too short to read this entire article at the moment (okay, other contributing factors include the fact that I'm also stuffed full of home-cooked Afghan food and baklava and it's past my bedtime).

But I don't need to, really. All I need to know is that Charlie Brooker of The Guardian is writing on the idiocy of 24-hour TV news. The only point on which I beg to differ is the idea that the malady of the 24-hour news cycle is limited to TV. The Guardian itself, while not exercising the heightened levels of gratuitous curiousity of, say, the New York Times, has been to know to engage in its own form of speculation over nose-picking from time to time.

Image of the CNN center a la wikipedia commons, as per usual.
Posted by kimberly kinchen at 8:00 PM No comments:

(Another) word on zoos 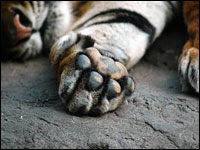 The post I wanted to put up tonight isn't working out (yet).

But I've been especially bothered by zoo question - should they even exist? - since a kid and a tiger were killed at the San Francisco zoo last Christmas, so I'll offer this up for now.

I took my own not-quite-right post about that event down. On rare occasions, I'd like someone else to speak for me.
So, I give you a more articulate (and more sensitive) voice. Radio Lab is the master work of one Robert Krulwich and one Jad Abumrad. They make a great radio duo, but when it comes to zoos, as in this episode, I'm with Jad all the way.
Posted by kimberly kinchen at 7:01 PM No comments:

FP Passport is Open for Business - I mean, Comments

And it's about damn time. One of the best fopo blogs around--smart without taking itself too seriously, entertaining without dumbing anything down, fair without bending over to ridiculous lengths to get "both" sides--is now open for comments.

For years I just thought I was too techno-mojo-retarded to figure that part out, even after I subscribed to the mag, which I thought would get me special privileges. But, not TMR. Just kinda slow to figure out there was no comment function. Many a time I wanted to say something, only to hit a dead end. It was kind of funny to call that a blog when it didn't have one of the basic functions, but FP Passport is so close to making being a wonk fun that it could get away with no comments all that time, I guess.

I hope they don't mind my pulling the logo from the site. I am cheerleading for them, after all...
Posted by kimberly kinchen at 7:55 PM No comments:

Rx for U.S. on Cuba: Chill Out 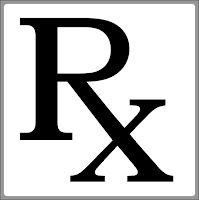 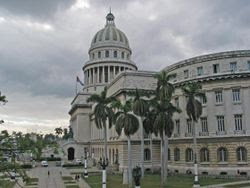 As Fidel officially relinquinshes the reigns of absolute power to Raul, I want first to say: told you so.

In some ways, Fidel's fade out proves American hysteria was only that. No major upheavals, no mass exodus from Miami back to Cuba, just a quiet--and quite expected--passing of the torch to Raul.

Second, because this guy somehow channels all of my innermost thoughts on foriegn policy even though we've never met (I sadly admit that our eyes having met that day last spring while crossing paths at Columbus Circle doesn't mean much to him), I must plagiarize and paraphrase my own blog work here to remind you that: Fareed Zakaria is so f&#%ing smart, not to mention reasonable, especially on Cuba.

So I reiterate, 3 words: Secretary of State. You listening, Senator Obama? Senator Clinton? Especially HRC, as Zakaria's critiquing that failed U.S. policy towards Cuba while he's critiquing the problematic aspects of HRC's experience, and along the way he's indicting the Democratic establishment for allowing the neocons to define the terms of almost all policy debates over the last decade.

Pictured is the Capitolio, in Havana.
Posted by kimberly kinchen at 7:07 PM No comments:

News of the World